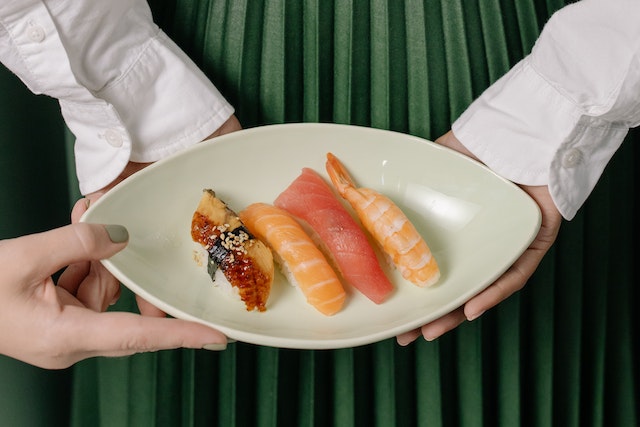 What is nigiri vs sushi?

In my opinion, there is no difference in quality between the two, so if you’re comfortable with either one, then that’s great. But if you are interested in learning about sushi, I recommend trying it at a sushi restaurant like Hanaya so you can see the difference for yourself.

Nigiri (or “hand-rolls”) are sushi rolls that are shaped like hand-rolled sushi, which are made using rice and a filling. It’s usually served on a plate with a small dish of sauce. Nigiri is a popular food in Japan because it’s a great way to enjoy sushi.

Related: What Ramen To Try First?

What is sushi, though, first? Sushi is essentially a Japanese cuisine that combines specially prepared rice with another item, typically some kind of fish or seafood, usually raw but occasionally cooked.

Even though the word sushi is frequently instinctively linked with raw fish, it’s not incorrect to argue that the major component of sushi is vinegared rice. Sushi can be made in a variety of ways, but it always contains rice. Sushi is actually a combination of the Japanese terms for rice and vinegar. While the toppings and fillings on sushi can vary, rice is always a component.

In Japan, sushi chefs undergo years of training just to learn how to make sushi rice before they ever pick up a knife and start cutting up fish. In a nutshell, sushi rice is a medium grained white rice that is prepared with seasonings such as salt and sugar.

Nigiri means “two fingers” in Japanese. As the name suggests, this is a small, delicious treat that features a thinly sliced drapery of raw fish, laid over a cluster of sweet and salty rice. The smooth taste of the fish is combined with the sticky and tangy flavor of the rice to create an absolutely superb mouthfeel on the roll. It’s acceptable to eat nigiri with either your hands or chopsticks, just like other forms of sushi. If you use a fork, nobody will turn their nose up at you, and you can eat whatever you want.

Although it is sushi, nigiri does not come in any kind of traditional rolled form, which is why we have not mentioned any kind of tight sushi roll. The most popular type of sushi in America is the roll-based, Makizushi form, which is the least authentic of all the types of sushi. It’s new to nigiri and I’m not sure what to get. The best nigiri sushi is usually made with bluefin tuna, salmon, or halibut. These types of fish are very firm and have a relatively high fat content that makes them melt in your mouth and that perfectly matches the sweetness and saltiness of the rice.

What type of sushi is nigiri?

A nigiri sushi consists of a mound of rice with a slice of fish on top. The Japanese call it nigirizushi, which means hand pressed sushi. Nigiri is a type of sushi where the rice is molded by hand and the fish or topping pressed by hand atop the rice. The mound of rice underneath helps adhere the strip of raw fish to it. Sometimes the chef will place a small amount of wasabi between the rice and the fish, and sometimes a small amount of scallions or ginger can be added to the fish.

The fish is mostly raw. tuna, salmon, yellowtail, and albacore are examples. Another popular topping is the belly section of blue fin tuna. Shrimp nigiri, which features shrimp that has been boiled and butterflied, and eel nigiri, which consists of a mound of sushi rice with a strip of grilled eel on top, are two notable exceptions to the raw statement. The fish and seafood for nigiri and all sushi should be fresh and handled with care. The preferred method for eating sushi is to pick it up with your fingers and eat it all in one bite. In general, nigiri should be dipped in the soy sauce so that the fish, not the rice, is immersed, and eaten upside down. The reason for dipping the fish side down is so that the rice doesn’t absorb too much soy sauce and so that the soy sauce doesn’t end up with grains of rice in it.

Confused on the types of sushi still? Read more on our article on Different Types of Sushi