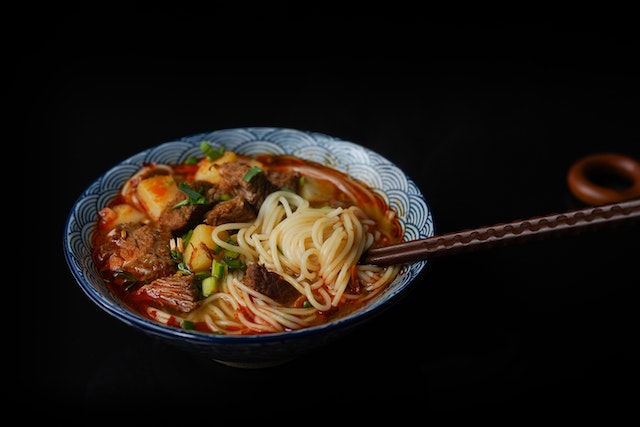 What are the 5 components of ramen?

Ramen is a Japanese noodle dish with a broth made from soybeans, wheat, and barley. It is often served with a topping of sliced pork, vegetables, and/or egg. It has been said that ramen is an essential part of Japanese culture. We can never get enough of ramen, but have you wondered whats in it? Let’s take a closer look on the 5 main elements of a delicious ramen!

The main components of a finished ramen broth are soup, tare (sauce), and fats and oils. Boiling the components in water, which transfers taste and umami, produces the soup. Only after the soup has been cooked and combined with the tare is it season.

The most popular broth varieties include chicken, shellfish, and tonkotsu (pork bone). Tonkotsu ramen uses pork bone, while tori-paitan ramen uses chicken bone (the basis ingredient is frequently included in the soup name). Other common ingredients include those derived from seafood, such as katsuo-bushi (dried bonito flakes) and niboshi (dried sardines), as well as flavorful vegetables like ginger and garlic, to name a few.

Tare is the ramen soup seasoning. Shoyu (soy sauce) tare, shio (salt) tare, and miso tare are the three categories under which tare is categorized. Tare is used to boost flavor as well as salinity. It is frequently produced by extracting and condensing umami from a variety of substances, particularly the glutamic acid-rich kombu kelp. The tare is made independently of the broth and then mixed with it in the bowl. Since the salt concentration is unstable, seasoning soup in a pot is uncommon. The tare used in each ramen is where the titles shoyu ramen, shio ramen, and miso ramen from.

Making ramen noodles involves mixing flour with water and carbonated water to form a dough, stretching it out thinly, then cutting it into noodles. Eggs and other substances are also used. Noodle quality varies based on the type of flour used, how quickly the water is added, how thick the dough is, how thick and how it is sliced, and how old the noodles are.

The majority of ramen soups employ extra fats and oils to make them richer and more flavorful. Initially, the animal fats and oils that were taken from the bones and meat were just randomly put to the ramen. But over time, it has been customary to add the proper fats and oils to a dish at the proper time and in the proper amount. Depending on the kind of ramen being made, different animal fats and oils are taken and prepared. In some circumstances, softened hog backfat is heated, colander-filtered, and then granulated. Making flavor oil separately is typical practice. For instance, adding garlic to oil rather than broth gives the dish additional flavor because garlic is fat-soluble.

Any elements (a combination of soup, tare, oils, and fats) other than noodles and broth are generally referred to as toppings in the context of ramen. Chashu pork, menma, nori seaweed, wood ear mushrooms, green onions, eggs, and other ingredients are common toppings. The toppings are often prepared separately, then sliced and added to the noodles just before serving. You can add toppings to your ramen at many ramen establishments; chashu and ajitama (soft-boiled seasoned egg) are two well-liked options.

The skill making the ramen itself is an important component as well. Ramen is not that complicated of a recipe, since there are only 5 components needed to make ramen. There are a few that take the time to give love to this dish, like Hanaya. The execution and the proportioning of these components is a skill needed to be mastered for a long time. There are even schools specifically for learning to cook the perfect ramen as possible!